Using Environment Canada's radar data can be quite beneficial in weather sensitive decisions. To assist users, a comprehensive table of contents is listed below.

The RADAR images can be broken down into 4 main sections.

The system in place allows one to display by default the PRECIP-ET product which depends on both conventional and Doppler data. Occasionally Doppler data are not available for some radars, in which case the system displays CAPPI products that rely solely on the conventional data. On the other hand, if one or more radars are not available or under maintenance, the system displays a contingency product based on a composite generated from the available neighbouring radars.

In some cases, this composite, which is based on the product PRECIP-ET may include US radars. It is also important to note that for some regions neighbouring radars may not cover the entire domain of the radar out of service. To this end and to help the user identify these non-covered areas, red circles have been added to show the contributing radars in this composite.

The figure below illustrates an example of a composite built from 4 radars (two Canadian and two American) and generated over the XNI (Superior West) radar domain. For this example, we see that these four radars do not cover the whole domain of the XNI radar and circles warn the user of the presence of a non-covered area outside of the circles. It is important to note that these circles will be activated on the image only if the contributing radars to the composite are available.

The displayed image will be, by default, the latest one available in a series of 7 or 10 images (11 or 16 images for the new modern radar; read more on the new modern radar). The time interval between images is either 10 or 20 minutes (6 or 12 minutes for the new modern radar). To animate the series of images, you first need to click the "Play" button in the playback controls above. The animation of the images will stop after 5 minutes of uninterrupted play. Re-selecting the play button will re-activate the animation. In addition, you can select the images individually.

The Playback Controls are as follows:

Description of the three level views

All Overlays will appear upon selection and can be combined with other overlay layers.

By default, the cities layer is displayed at national, regional and local levels.

By default, the local level radars will also display circles, and roads.

The radar layer can be displayed in either eight or fourteen colour levels on the national, regional and local views.

By default the fourteen level colour palette is displayed.

How to Estimate Motion of Precipitation in Radar Images?

By comparing a series of RADAR images, forecasters can observe the development of a disturbance, follow its trajectory, determine the intensity of precipitation, issue alerts or warnings, and fine-tune their forecasts. You too can apply a few techniques to make a short term forecast.

How to animate our RADAR images to make a short term forecast (1 to 3 hours)?

Note: The local view radar image is oriented such that true North is located at the top of image.

Now, you need to determine the speed at which the echo is moving. This will allow you to forecast where it's likely to be in 1 or 2 hours. For this, you need to choose 2 images with a one hour interval.

You can also identify whether the intensity of precipitation is getting stronger or weaker by watching the color variations of the corresponding echoes. Similarly, you can identify the trend of precipitation (weakening or developing) by noting the expansion or contraction of the total coverage area in time.

You can now make your own short term forecast based on the movement of the RADAR echoes for any point on the RADAR screen.

All you need to do is:

Select to drag and drop, rename or delete.

The name you have entered for the shortcut already exists on your Weather shortcuts menu. Would you like to overwrite it?

There is already a shortcut with the same name in this list. Do you want to rename "link" to "link(2)"?

Your shortcut list has reached the maximum size of 30

What we are doing 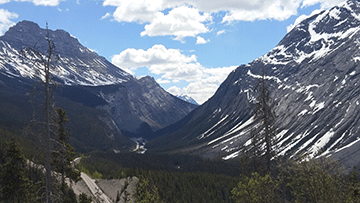 Feedback about this web site